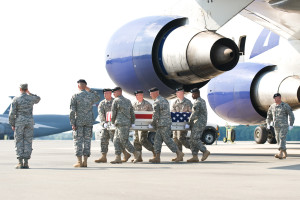 [When I did a bit of research it shows that there were multiple people who were killed in this same battalion / same incident which killed Robert.]

Spc. Robert L Voakes Jr., Was brought back home via air plane about a week after he gave up his life for his country in Afghanistan. The plane carrying the body of Spc. Robert L. Voakes Jr,. Landed at the Houghton County Memorial Airport in Hancock shortly after 9:00 A.M.

A very large group of supporters and various agencies around the copper country were on hand to remember Spc. Robert L Voakes, JR. and to escort him back to his hometown.

When I first got the news of the loss of our local soldier.. I was quite shocked. I spent the day searching for information to put the puzzle together. Of course it didn’t end up like most rumors… I did my usual job and quickly got the media on board to get as much attention on the subject as we could.  When I had contacted WLUCTV6 they took down the information and they did nothing for about a few days… (this is nothing unusual) I then contacted WBUP TV (ABC 5&10) and had Mike Hoey check into it quickly. As usual… it was quickly checked into and the next day we had coverage. [youtube]JI0KN112xQ4[/youtube]

Daniel Benishek was in the area for a dinner with the local GOP, when he spoke his condolences to the family of Robert Voakes.